“She’s a princess and you’re a jock,” he says. “And you’re a brain. And you’re a criminal. You’re all walking teen-movie stereotypes.”

“What about you?” Bronwyn asks.

Minor spoilers will be included, so if you dislike all spoilers, please refrain from scrolling down! 🙂

One of Us Is Lying is the story of what happens when five strangers walk into detention and only four walk out alive. Everyone is a suspect, and everyone has something to hide.

Bronwyn, the brain, is Yale-bound and never breaks a rule.

Addy, the beauty, is the picture-perfect homecoming princess.

Nate, the criminal, is already on probation for dealing.

Cooper, the athlete, is the all-star baseball pitcher.

And Simon, the outcast, is the creator of Bayview High’s notorious gossip app.

Only, Simon never makes it out of that classroom. Before the end of detention Simon’s dead. And according to investigators, his death wasn’t an accident. On Monday, he died. But on Tuesday, he’d planned to post juicy reveals about all four of his high-profile classmates, which makes all four of them suspects in his murder. Or are they the perfect patsies for a killer who’s still on the loose?

Everyone has secrets, right? What really matters is how far you would go to protect them. 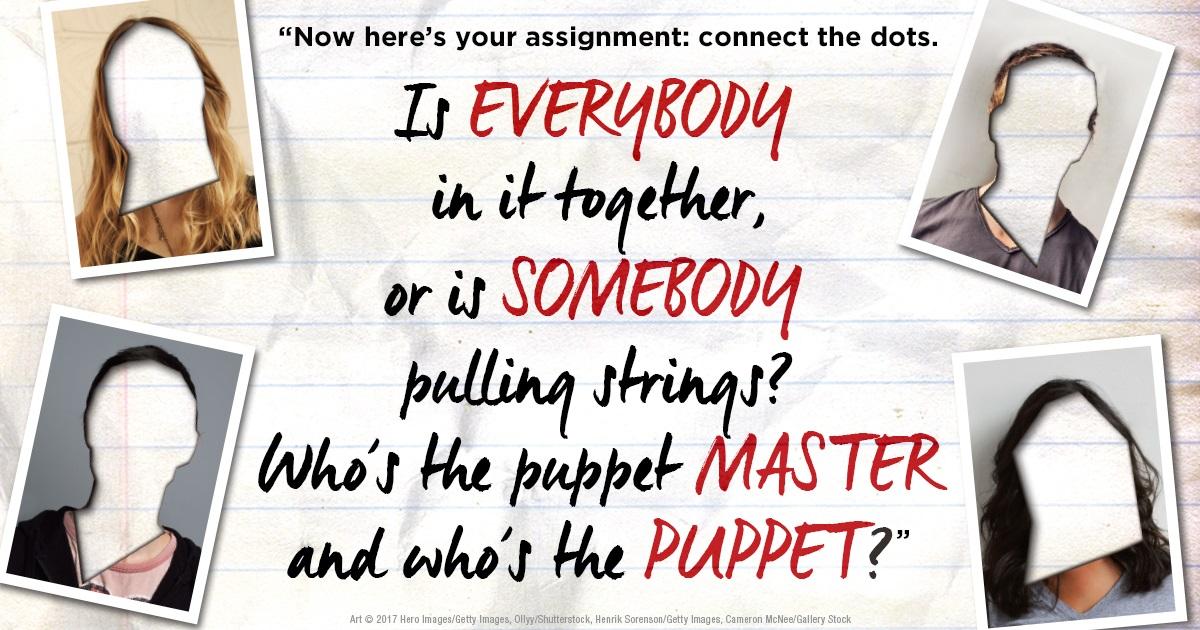 I’m not going to lie. This has got to be one of the most cliched, trope-y contemporary novels I’ve read this year- and I loved it.

All of these characters- the Brain, the Princess, the Bad Boy, the Jock, and the… Gossip, I guess?- are basically living, breathing stereotypes, but the author somehow makes it work. They’re all forced to spin different lies in order to protect their own secrets. Cooper isn’t just an all-American, cookie cutter Perfect Jock, any more than Nate is just an Angsty Teen with nice hair and criminal tendencies.

Now, I want to take a moment to appreciate Addy. I know her character arc wasn’t exactly mindblowing- some may even consider her vapid, especially considering what her arc revolved around- but she grew so, so much, and I was here *claps* for *claps* it. YOU GO, GIRL. ROCK THAT HAIR.

Frankly, I came into this expecting a dark, twisty thriller, and what I got was more of a very contemporary novel meshed with some Gossip Girl elements. Don’t get me wrong; I found the book fun, fast-paced, and witty, BUT it didn’t have that extra oomph factor that I look for in most thrillers. You know… that incredible plot twist, that adrenaline-inducing punch of action. Put simply, it was a different type of thriller than I had originally thought, and it didn’t quite keep me on the edge of my seat.

Regardless, One of Us is Lying is still an amazingly quick, amazingly entertaining read. The author hides the answer in plain sight, but the big reveal turns out to be absolutely delicious. Plus, I’d like to announce that I, arguably the most clueless person in the entire universe, *flips hair modestly* figured out the mystery. *flips hair again, for added emphasis*

It concerns me you’re avoiding a promise not to murder me.

The romance took me completely by surprise. I didn’t think I’d find any kissy scenes here, but turns out, I was completely wrong. Sparks flew. Passion burned. Tongues were inserted into mouths. It was great. I found myself quite enjoying this budding romance between Miss Goody Two Shoes and Hot Delinquent. It was definitely super cheesy, but, like every other sorta-kinda-cliche aspect of this book, it worked!

My heart melted for this slightly predictable, yet extremely sweet, couple. I loved that the two characters didn’t immediately fall madly in love upon laying eyes on each other. It took time and effort on both sides for their relationship to build, for them to get to know each other as real people instead of blown-up stereotypes. (And those late-night, sort of shady phone conversations? YES.)

The sibling-to-sibling, heart-to-heart conversations also had me dabbing tears out of my eyes. Maeve and Bronwyn, Ashton and Addy, heck, even Cooper and Lucas, all had each other’s backs when it mattered most. I wish I could say the same for my sister and me, but unfortunately, we’re still stuck on that screaming-at-each-other-for-stealing-clothes phase.

The writing style is fun and lighthearted, so the pages fly by. The dialogue between the main characters was especially amusing. Most of all, though, I loved the slow-burn friendships that the Murder Club (yes, you read that right!) developed as they weathered the storm of paparazzi, school politics, and online harassment.

I guess we’re almost friends now, or as friendly as you can get when you’re not one hundred percent sure the other person isn’t framing you for murder.

Sometimes, however, the different POVs were difficult to distinguish. If I didn’t read the chapter title, I would have no idea whose voice it was until I figured out the context of the situation. All of the characters, tone-wise, kind of sounded exactly the same? One time, it took me two full pages (and the mention of feeding Stan the bearded dragon crickets) to realize I was reading from Nate’s point of view, not Bronwyn’s. But, in retrospect, that’s probably just a me-being-clueless problem, not a book-being-bad problem.

McManus touches upon many sensitive societal issues, and I know that her discussion of mental illness, in particular, may not be the most tactful. I’m no expert on the matter, but I do believe that she could have done a better job in portraying some of these topics, though it didn’t take away from my enjoyment of the book. I’m trying to speak as vaguely as I can so I don’t give away the plot, but many other readers may have found different interpretations of the book and raised concerns, which of course are perfectly valid.

Overall, this is the perfect book to hook you in on a hot summer day. It’s an addicting contemporary mystery, chock-full of enjoyable cliches (WOW. I can’t believe that I actually typed that) and cutthroat high school drama.

10 thoughts on ““One of Us is Lying” by Karen M. McManus (Book Review) | The Murder Club, Ft. Enjoyable Cliches And Not A Lot Of Lying”