I recently reread And I Darken, reread my review for it, and then felt massively disappointed in myself because I didn’t know it was possible for my writing to be that clunky and grammatically incorrect. (Not even kidding, I literally cringed a grand total of seven times.)

SO. I took it upon myself to revamp my review for And I Darken—for no reason other than that can’t just sit here pretending everything’s fine, knowing that I’ve written a horrid, nonsensical review for one of my favorite books ever?

(Also, I’m calling it right now: I’m going to happen upon this review about a year from now and then immediately want to rewrite it all because it sounds so bad. Note to Future Hannah: RESIST THE URGE.)

I think this has taught me never to trust the judgment of fetus Hannah. Lesson learned indeed.

No one expects a princess to be brutal. And Lada Dragwlya likes it that way. Ever since she and her gentle younger brother, Radu, were wrenched from their homeland of Wallachia and abandoned by their father to be raised in the Ottoman courts, Lada has known that being ruthless is the key to survival. She and Radu are doomed to act as pawns in a vicious game, an unseen sword hovering over their every move. For the lineage that makes them special also makes them targets.

Lada despises the Ottomans and bides her time, planning her vengeance for the day when she can return to Wallachia and claim her birthright. Radu longs only for a place where he feels safe. And when they meet Mehmed, the defiant and lonely son of the sultan, Radu feels that he’s made a true friend—and Lada wonders if she’s finally found someone worthy of her passion.

But Mehmed is heir to the very empire that Lada has sworn to fight against—and that Radu now considers home. Together, Lada, Radu, and Mehmed form a toxic triangle that strains the bonds of love and loyalty to the breaking point. 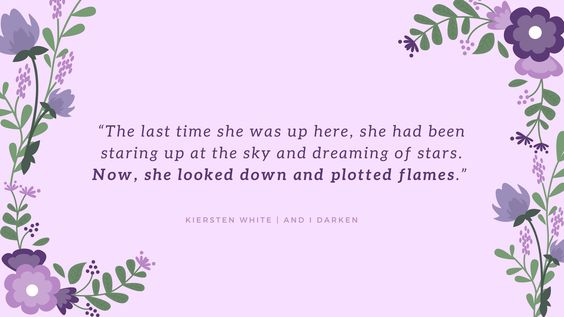 Lada, Daughter of the Dragon

“So the question becomes, Daughter of the Dragon, what will you sacrifice? What will you let be taken away so that you, too, can have power?”

I was absolutely BLOWN AWAY by White’s masterful portrayal of Lada’s ruthlessness, cunning, and fierceness. I have never, ever met a character so unapologetically angry as her—and I loved it.

Let me get this straight: she is NOT a “good” person. She’s not one of those noble antiheroines, who wax on about how they’re “worthless” and “menacing” and “dangerous” but go off and save the world and rescue a kitten from a tree while they’re at it and then everyone loves them. (It comes without surprise that she does most of the stabbing in the story.)

But most importantly, Lada ultimately stays true to herself. She fights to protect what is “hers”—though she may be ruthless, she is not heartless. Her cruelty is a means to survive and, I think, a response to the brutal world around her. In a world where women are bought and sold into marriage like coins, she fights tooth and nail to defy societal expectations and prove herself just as strong and powerful as any man.

If Lada was the spiky green weed that sprouted in the midst of a drought-cracked riverbed, Radu was the delicate, sweet rose that wilted in anything less that the perfect conditions.

Poor darling Radu. Since I’ve already read Now I Rise, I can’t help but feel incredibly BAD for him because I know his emotional turmoil is only going to get worse.

Even as a child, he is so charming, so lovable, so cunning, and generally just has an amazing mind for politics. His witty banter is still one of my favorite parts of the book.

Everything Radu does is for love. He is so tender-hearted, it hurts—but he’s more than just a sensitive soul; he can also be incredibly manipulative. Calling his relationship with Lada a “love-hate” relationship would be far too simple—it was more of a dynamic, love-miscommunication-jealousy-bitterness-affection-and-all-these-other-emotions relationship.

“I am yours,” she whispered. The words cut like knives, barely out of her mouth before he stole them, sealing them with his own lips.

In my opinion, romance is NOT the focus of this book. So if that’s what you’re searching for, once again, you will be disappointed—but that’s not to say the book lacks romance.

This is how it goes. So Lada and Radu are just minding their own business trapped in the Ottoman courts—Lada being Lada and wanting to burn everything to the ground, and Radu being terrified like the cute lost little boy he is—and suddenly, Mehmed (yes, THAT Sultan Mehmed) comes waltzing into their lives with an imperious toss of his cloak. And thus begins their tangled web of a relationship.

(Also, about Mehmed: Sorry, but the whole “my-harem-is-a-duty” thing really doesn’t vibe well with me. I know that this was acceptable within those specific societal constructs—the 15th century isn’t exactly known for its amazing treatment for women—and that compared to his successors/predecessors’ antics, Mehmed seems like an absolute angel. However, I personally couldn’t help but recoil every time his harem was brought up. ANYWAYS. Moving on.)

“I cannot afford to lose you, too.”

“You cannot lose something you do not own. Take me with you.”

Overall, the relationship-building was incredibly intriguing, and I can’t wait to see how Lada, Radu, and Mehmed continue to interact and influence each other in future books despite being miles apart. I’m crossing my fingers that the trio reunites and don’t end up killing each other. Though, after skimming over their actual history, I have a really bad feeling about it…

Also here’s some more shameless self-promo, which I happen to excel at doing:

Read my review of Now I Rise (Book 2 in The Conqueror’s Saga)!

Read the excerpts I’ve collected from Bright We Burn (the final installment in The Conqueror’s Saga)!

Have you read “And I Darken” yet? What was your favorite part? Do you also feel an uncontrollable urge to re-rate/re-review your favorite books?

28 thoughts on “A Repackaged Review of “And I Darken” by Kiersten White | Ft. My Favorite Characters Ever”